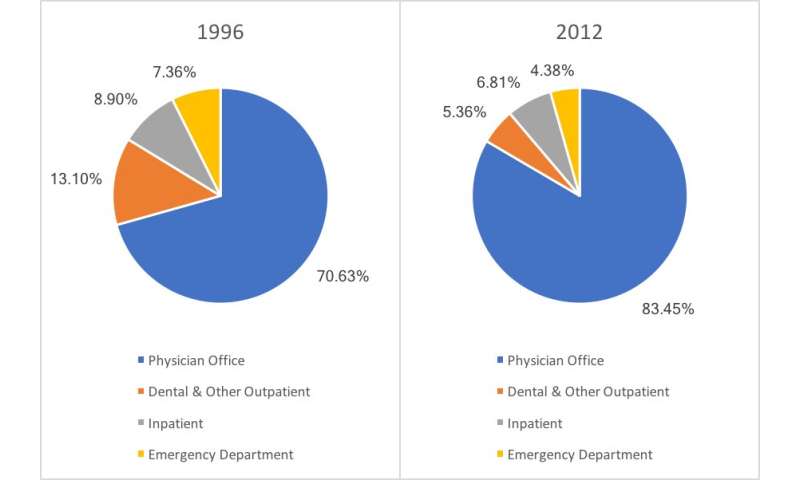 An analysis by USC Schaeffer Center researchers found that from 1996 to 2012, the proportion of opioid prescriptions from physician’s offices increased even as the share from other settings had decreased. The researchers conducted the analysis based on data from the Medical Expenditure Panel Survey conducted annually by the Agency for Healthcare Research and Quality in the U.S. Department of Health and Human Services. Credit: USC Schaeffer Center

Around the country, state legislatures and hospitals have tightened emergency room prescribing guidelines for opioids to curb the addiction epidemic, but a new USC study shows that approach diverts attention from the main sources of prescription painkillers.

Overall opioid prescribing skyrocketed 471 percent from 1996 to 2012, according to the study by USC Schaeffer Center for Health Policy and Economics and Keck School of Medicine of USC.

“One hypothesis has been that the emergency room is a recurrent site of care and that patients could be going from ER to ER to obtain multiple prescriptions to support their addiction,” said Sarah Axeen, an assistant professor of emergency medicine at the Keck School of Medicine and researcher at the USC Schaeffer Center who led the study. “But our analysis shows that emergency rooms account for a very small share of all prescribed opioids. In fact, doctor’s offices are the source of many more of these drugs.”

The study published on Jan. 16 in the journal Annals of Emergency Medicine comes just as a growing number of states have tightened restrictions on opioid prescriptions with the hope of curbing addiction and reducing the number of opioid-related deaths.

The data analyzed for the study were from the annual, nationally-representative Medical Expenditure Panel Survey of patients. The survey is conducted by the U.S. Department of Health and Human Services’ Agency for Healthcare Research and Quality.

A look in the mirror

Doctors and other providers are wrestling with the scope of the opioid epidemic, and with the acknowledgment that they contributed to it, said Michael Menchine, a study co-author and an associate professor of clinical emergency medicine at the Keck School of Medicine.

“From the 1990s to at least 2013, we had convinced ourselves that prescribing opioids was a fine thing to do” for patients in chronic pain, Menchine said. “It is hard to look in the mirror years later and say 2 million people might be dependent on opioids because of this sort of practice.”

Opioids killed more than 42,000 Americans in 2016 – the most of any year on record, according to the Centers for Disease Control and Prevention. At least 40 percent of all opioid overdoses involve a prescription.

High-risk opioid users – those with the highest use – represent the top 5 percent of annual opioid consumption. The study showed that a high-risk user obtains just 2.4 percent of his or her opioids from an emergency department prescription, but 87.8 percent from a doctor’s office. Furthermore, more than 80 percent of the chronic and high-strength dosage prescriptions were from office settings.

Study co-author Seth Seabury, the director of the Keck-Schaeffer Initiative for Population Health, said policymakers and providers have good intentions but over-restrictive prescription policies for emergency rooms are not targeting the main source.

Policies that just restrict opioid prescriptions do not address the growing need for treatment for people in the throes of addiction. The health system could benefit from a more holistic approach by putting greater focus on substance abuse treatment, starting in the emergency room, Menchine said.

“I want to be there for my patients and if they have substance abuse problems, I want to be able to address it in the best way I can,” Menchine said. “Too often people think the solution is to simply say we can no longer prescribe opioids. For me, the solution is to say: It looks to me like you have a problem with opioid addiction and here are the options available so you can address it.”

NEVER TRUST A DOCTOR!  DO YOUR OWN RESEARCH!