Mothers:  DON’T do this to your child!  They must never suffer because of your addiction!

Summary:
Robin Adams tells of the challenges and joys of adopting a baby affected by his birth mother’s opioid use.

Note: This is one of a series of stories by people whose lives have been affected by the use of opioids. Fighting the nation’s opioid crisis is one of HHS’s main priorities.

The drug test came back positive for opioids and the needle puncture sites in the young, pregnant woman’s arms were infected. At just 92 pounds, neither she nor her unborn child were benefiting from any nutritional intake. She returned to her OB/GYN six weeks later, keeping few prenatal appointments in total. When she returned, she was prepared; she had another person’s urine in her purse. But she fooled no one, and her physician offered to help her find treatment and recommended a facility where she could receive medication-assisted treatment (MAT) and medical care. She denied her drug use and rejected the referral.

Baby Asa was born just a few weeks later and a few months early, weighing only three pounds and dependent on heroin. His life began in rehab. He was a tiny, unhappy, uncomfortable, failure-to-thrive newborn still in the throes of Neonatal Abstinence Syndrome (NAS). He was one of thousands of babies born with NAS in 2014 and one of thousands who entered the foster care system as a result. NAS is a group of medical problems that occur in newborns who were exposed to drugs while in the mother’s womb. 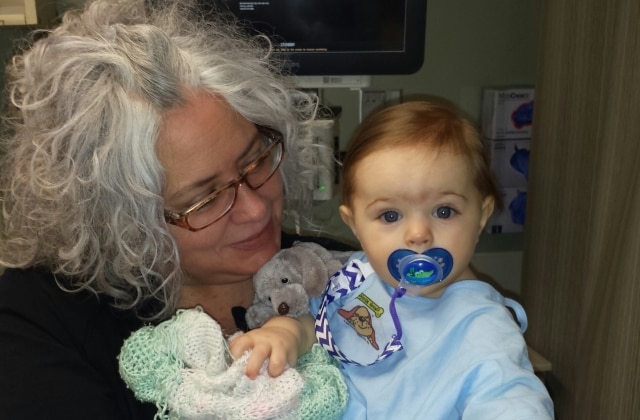 Robin holds Asa in a hospital room during one of his hospitalizations at a year old.

When Asa was discharged from the NICU, he came to live with me as a kinship foster care placement.  His given name was Leland and he was a grandson of my first cousin. Today, he is 3 years old and is a thriving, energetic, smart, preschooler with a sweet disposition and a strong will.  My husband and I have adopted Asa.  He is our son, and we will do everything we can to shelter him from the storm of heroin. We will try to choose the right words when the right time comes to tell him his story.

We will tell him that his biological parents couldn’t recover from their disease without the treatment they needed. We will tell him that they loved him very, very much, but the court system determined he would not be safe if he returned to his birth parents.  When he is old enough, we will focus on the positive. We won’t tell him about the multiple overdoses, multiple arrests, and, God willing, we will never have to tell him about their deaths.

Raising Asa isn’t easy; loving him unconditionally is. Not sleeping for more than 15 minutes at a time for his first year of life took a toll. Five therapy appointments per week for three years were difficult to schedule and manage. Hospitalizations and multiple trips to specialists proved to be nerve-wracking and worrisome.  Managing feelings of anger toward his birth mom zapped my emotional strength and challenged my maturity in ways I hadn’t imagined. Every time she used a dirty needle, she risked his life. Every time she lost consciousness and her pulse slowed, so did his. Every time she went without oxygen, so did he. Yet, he survived her battles, and now I will move mountains to make it up to him. 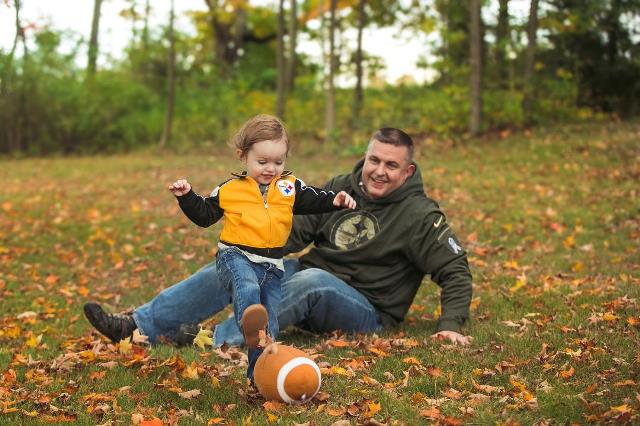 Robin’s husband, Sean, and Asa play with a football.

My son is inspiring me to find ways to help other babies like him.

I will not keep his story a secret from him or from our community. There is too much to be done to fight the opioid epidemic and stigma that prevents people from getting the treatment they and their babies need. Increasing access to evidence-based treatment like MAT; creating awareness about babies born dependent on opioids; and supporting more research on the impact of opioids in utero and throughout childhood and the best interventions to care for these newborns are all foundational building blocks for the smallest, youngest and most vulnerable victims of America’s opioid crisis.

Securing treatment cribs is also just as important as expanding capacity for more treatment beds. I want my work –and the love I’ve gained – to honor Asa’s life and his early struggles as a victim of the nation’s opioid crisis.

The above article was obtained HERE.