A note from NationalAddictionNews.com, to those of you who use and abuse weed, opioids, benzos, antidepressants, hypnotics, stimulants, and antipsychotics.  STAY HOME WITH YOUR ADDICTIONS!  KEEP YOUR ADDICTIONS TO YOURSELVES AND KEEP OFF THE ROAD!!!!!!!  ARE YOU TOO HIGH TO UNDERSTAND YOU HAVE THE LIKELY POTENTIAL TO KILL AND DISABLE CHILDREN, ADULTS & ANIMALS???????

Patients who are prescribed opioids and the clinicians who prescribe them have more to be concerned about than steadily rising rates of opioid overdoses, according to a new study.

The research, published Friday in the journal JAMA Network Open, shows that drivers who are on prescribed opioids are twice as likely to be in deadly two-vehicle accidents than those not using the drugs. As the United States struggles with an opioid epidemic, these findings could affect health care providers’ decision-making processes, the authors say.
Statistics from the US Center for Disease Control and Prevention show that although the rate of opioids prescribed per 100 people decreased from 72.4% to 66.5% from 2006 to 2016, 214 million opioid prescriptions are written each year.
Study author Dr. Guohua Li, a professor of epidemiology and anesthesiology and the founding director of the Center for Injury Epidemiology and Prevention at Columbia University, said he and co-author Stanford Chihuri, a staff associate in Columbia’s Department of Anesthesiology, were motivated to take on this research because “the ongoing opioid epidemic has spilled over to the nation’s roadways, with deadly consequences.”
For the study, the researchers used data from the National Highway Traffic Safety Administration’s Fatality Analysis Reporting System, which contains records from throughout the United States on motor vehicle crasheswith at least one death within 30 days of the accident. This data is based on “driver-related factors,” the unsafe actions of drivers that lead to crashes. A driver with at least one driving error resulting in that fatal crash becomes known as the crash initiator. 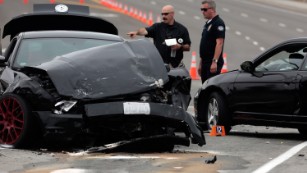 The researchers used these driving errors to measure which drivers were at fault for crashes and used toxicology results to look for the presence of opioids.
After looking at 18,321 driver pairs who died in two-vehicle accidents between 1993 and 2016, Li and Chihuri found that 54.7% of deceased drivers who tested positive for prescribed opioids crashed because they were unable to stay in their lane. Additionally, more crash initiators overall tested positive for prescribed opioids, alcohol or both than those who were not initiators.
Previous research has shown that opioids can impair drivers by causing them to be dizzy, drowsy or even sedated. By decreasing alertness and increasing reaction time, opioids cause patients to be at increased risk of crashing while driving. The medications often carry warnings against driving, operating heavy machinery or participating in other potentially dangerous activities while taking them.
The authors acknowledge limitations to the study. Drivers who tested positive for an opioid were not necessarily impaired. Also, the Fatality Analysis Reporting System does not record the dosage of opioids or alcohol. And although driving errors were standardized to understand who was faulted for the accident, this may not be enough information and varies from state to state. 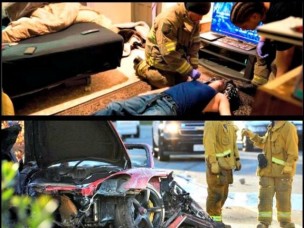 Li and Chihuri conducted a previous study that showed that, before the onset of the opioid epidemic in the 1990s, opioid use was responsible for only about 1% of driver deaths in the United States. As both illicit and prescription opioid use has increased, the number of motor vehicle deaths from opioid use has increased to at least 7%, the study says.
To reverse this trend and ensure that patients do not fall victim to driving under the influence, education and collaboration between patients and clinicians is necessary, the researchers say.
Click to article source

FAIR USE
Any copyrighted material (including, but not limited to, written words, articles, graphics, videos, etc) across the content of NationalAddictionNews.com is used in accordance with ‘Fair Use’ practices and in accordance with the Fair Use Section 107 of the Copyright Act, as our content is strictly for non-commercial use and for nonprofit educational purposes. At the end of articles not authored by NationalAddictionNews.com, are links to the sources of original content.

PLEASE FEEL FREE to comment on those articles that I open for comments. People deserve good dialogue in order to help process life. That said, please be aware that we moderate each comment to ensure that it is on topic, not derogatory to God or people, and is not advertising or spam. Links and emails will not be posted as we do not have the time to properly vet them. We ask that you keep your comments brief and on topic so that they can be posted and appreciated by all.

DISCLAIMER
The views and opinions expressed in the articles contained in this blog are not necessarily those of NationalAddictionNews.com, unless authored by NationalAddictionNews.com. My attempt is to bring you fair and balanced information so that you can make up your own mind regarding addiction, your physical health, mental health, vaccines, and medications. Regardless of the author, please do your due diligence to research the information presented anywhere on this site. As far as medications go, never abruptly discontinue any medication unless you undergo medically supervised detox by a board certified medical doctor. The information on NationalAddictionNews.com is not meant to take the place of health care or services you may need. Please see your primary health care provider about any personal health concerns and before making any changes to your health routine. Nutritionals are not approved by the FDA at this time.