Coronavirus spreads to the SOUTH of Italy, with panic-buyers stripping supermarket shelves bare in Palermo and 59 new cases nationwide, bringing the total to 288

Italy has confirmed its first case of coronavirus in the south after a holidaymaker from the north fell sick while visiting Sicily with her husband and friends.

The 66-year-old woman, from Bergamo, travelled to the Sicilian capital of Palermo on Friday morning before her home region of Lombardy was put on lockdown following a surge in cases.

But she began showing flu-like symptoms around 2.30pm Monday and was quarantined to her room at the Mercure hotel in the city centre, before being taken to hospital after a test came back positive.

Mayor Leoluca Orlando said the hotel remains open but the woman’s room has been secured. Another 29 people who arrived with her from Bergamo have been quarantined in their rooms, while 20 staff are also on lockdown.

Authorities are in the process of tracking down airline passengers and other people she came into contact with during her visit, he told Palermo Today. Her husband is also suspected of having the disease.

News that the infection had spread south sparked panic-buying in Palermo on Tuesday as shoppers stripped supermarket shelves bare and raided pharmacies for medical supplies.

Italy confirmed a total of 59 new cases of coronavirus across the country on Tuesday, bringing the total to 288 with seven deaths and one person recovered. The total is the largest outside of Asia.

The Italian outbreak also jumped the border into Austria and Croatia, which reported their first cases in travellers from Italy. Barcelona also reported a case in a traveller from Italy, while Switzerland confirmed its first case. 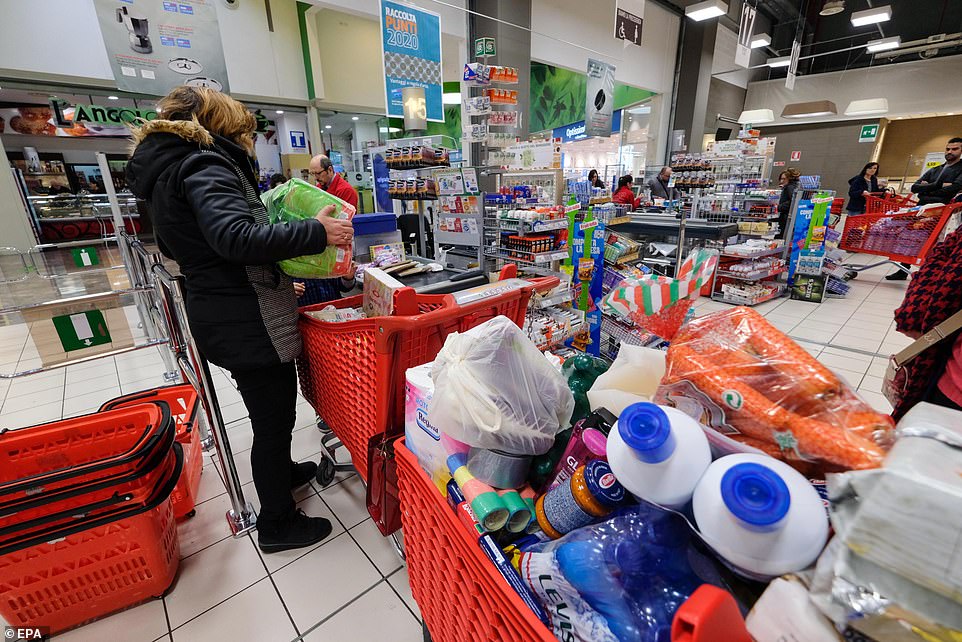 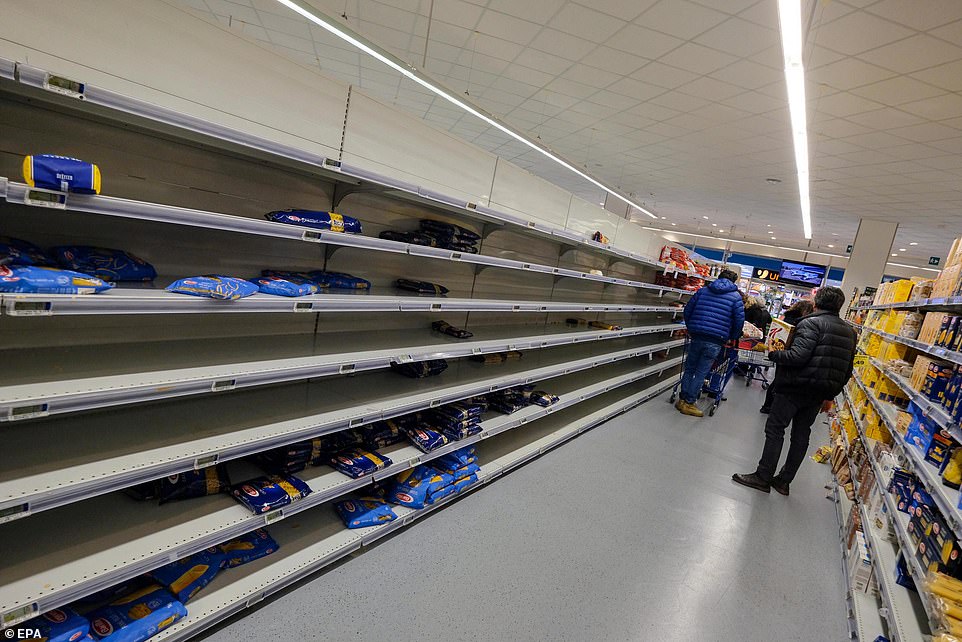 The woman travelled from Bergamo, in the now-quarantined Lombardy region, before the lockdown was put in place before falling ill in Palermo (pictured, empty supermarket shelves) 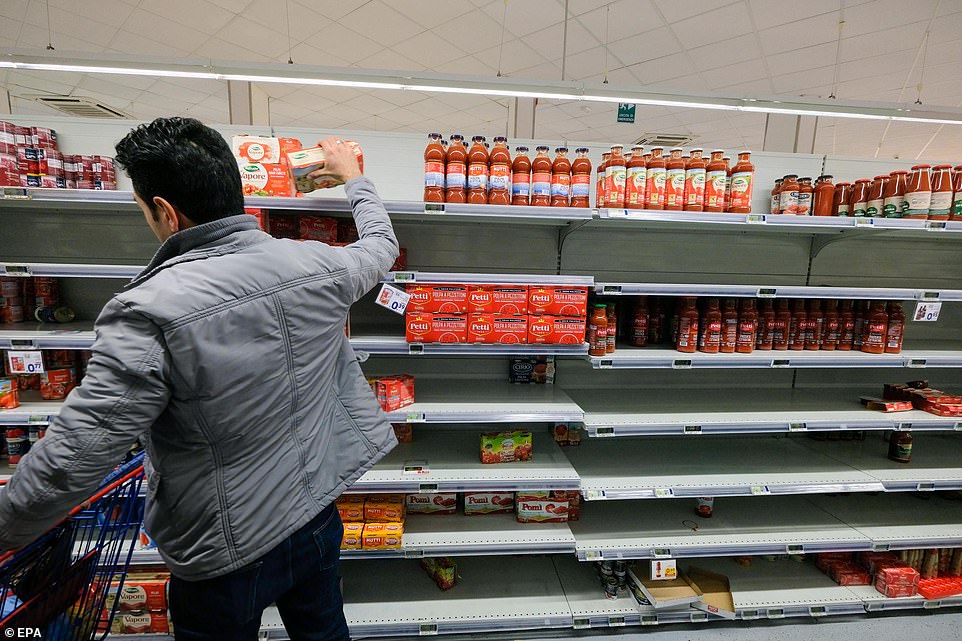 Italy registered ten new cases of coronavirus on Tuesday, but news that the disease has spread to the country’s south will come as a hammer-blow to health officials trying to contain it (pictured, panic-buying in Palermo) 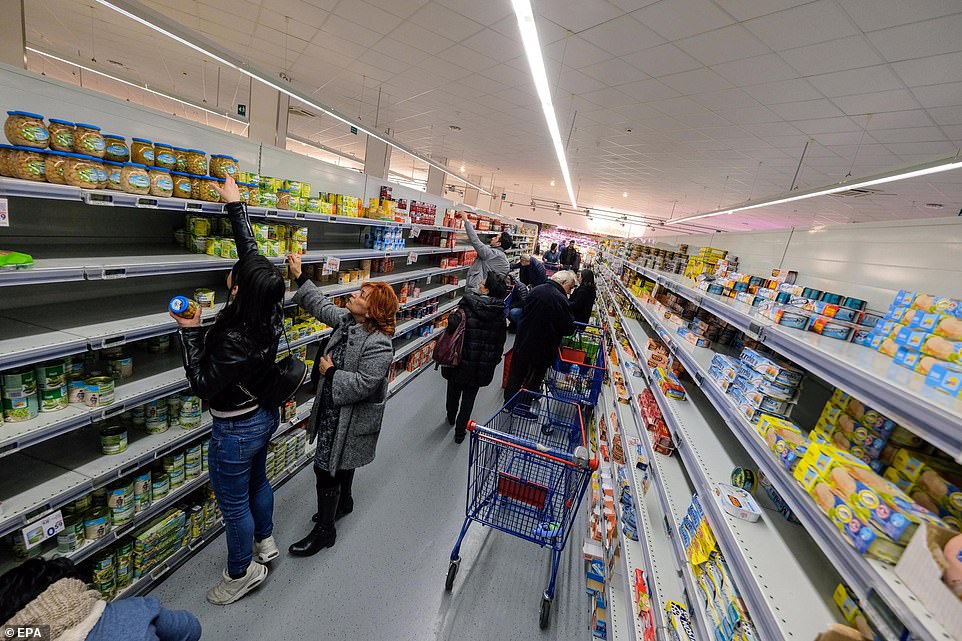 Shoppers in the Sicilian capital raided shelves for supplies amid fears the region may be locked down to stop the spread of coronavirus, after the city’s first confirmed case 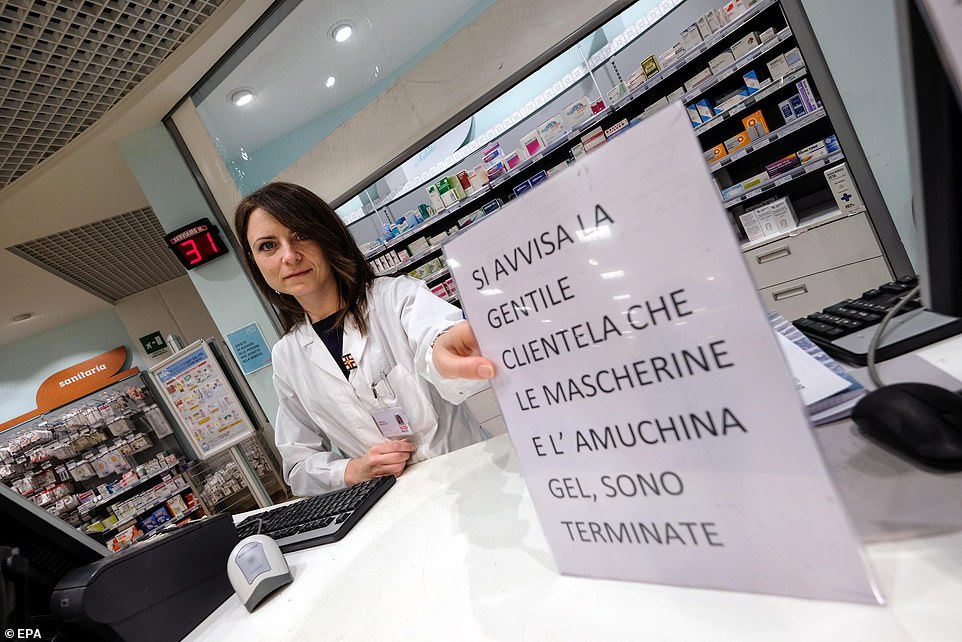 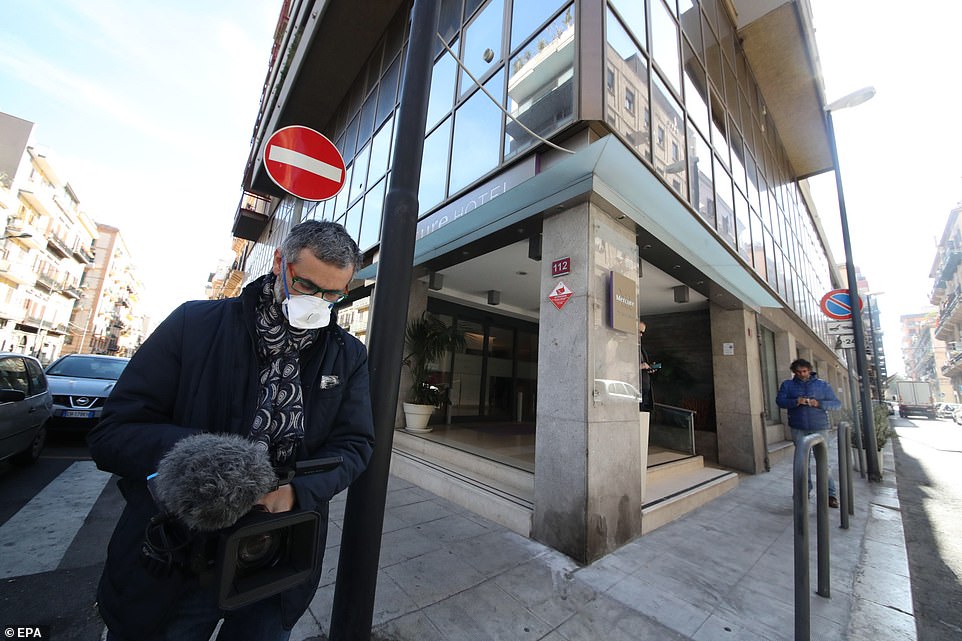 The woman had been staying at the Mercure hotel, in Palermo city centre, along with her husband and friends. The building  has now been quarantined as guests are tested for the virus 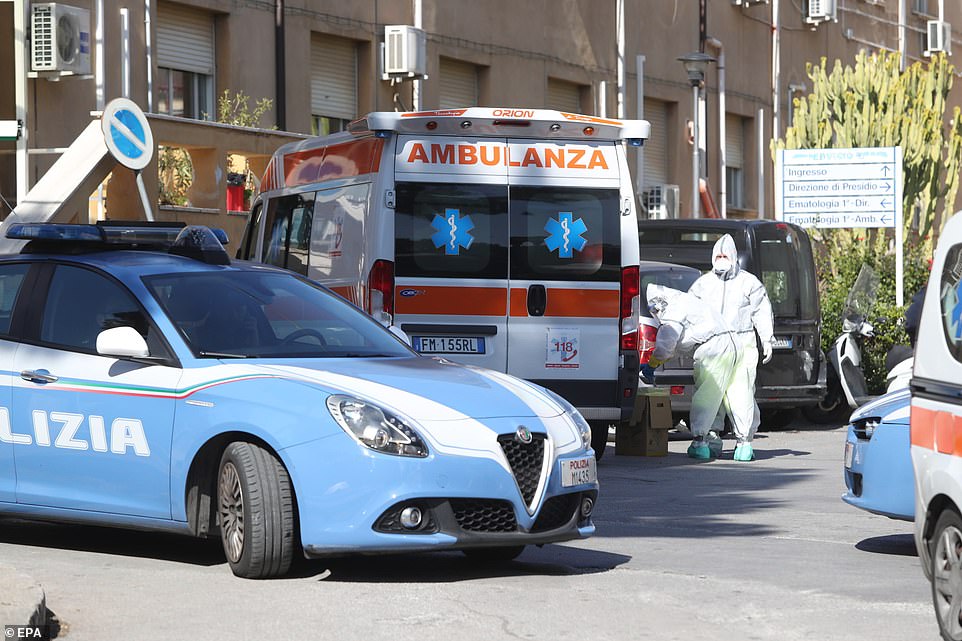 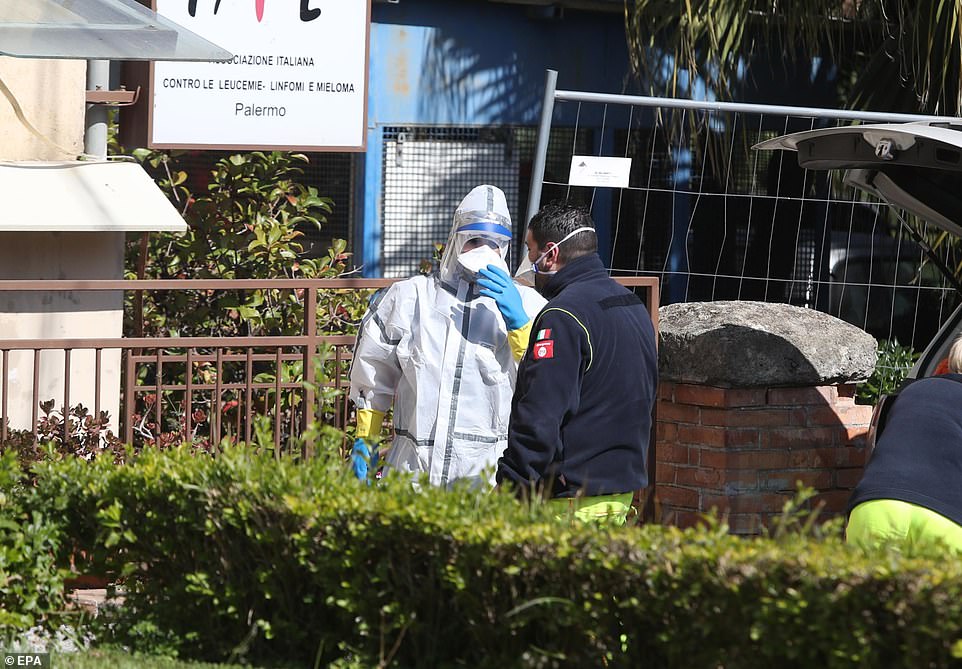 Two health workers wearing protective clothing speak to each other outside the hospital, where the woman in quarantined 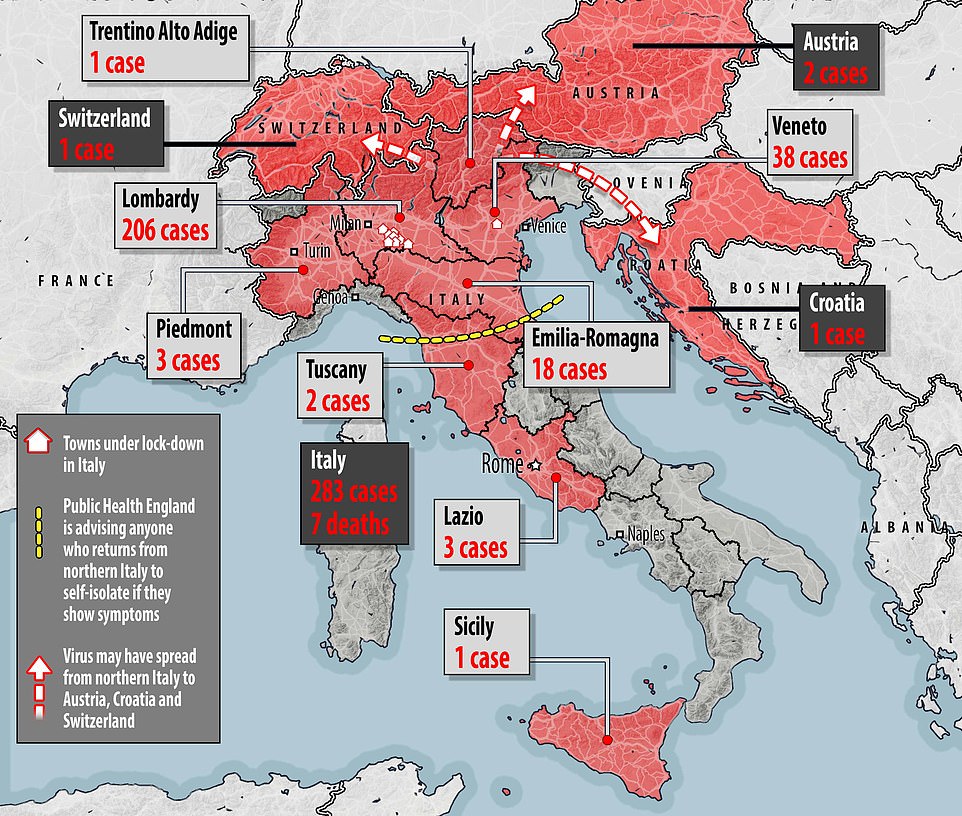 A weekend outbreak of coronavirus in northern Italy has now seen cases spread across the country – including to Palermo in Sicily – and jump the border to Austria, Croatia, mainland Spain and Switzerland

Swiss authorities did not immediately say where the case had come from, but public broadcasters said it occurred in the Italian-speaking region of Ticino – close to the Lombardy region of Italy.

Austria’s health authorities said two Italian citizens who were likely infected in Lombardy had tested positive in the province of Tyrol, while Croatia said a young man contracted the virus after visiting Milan.

Authorities in Barcelona said a patient tested positive for the virus after visiting northern Italy in the last few days.

In total 20 Italian provinces have now reported cases, with most being concentrated in the Lombardy and Veneto regions in the north.

But the regions of Liguria, Emilia Romagna, Tuscany, Trentino Alto Adige, Sicily and Lazio – where Rome is located – have also confirmed a limited number of cases.

Of the 288 cases, health authorities have confirmed that 109 people are in hospital and showing symptoms, 29 are in intensive care, and 137 have been told to isolate themselves at home.