US hospitals are preparing for 96 million coronavirus infections and nearly half a million deaths from the outbreak, leaked documents have revealed.

The spread of the deadly disease could be far worse than officials claim, with 480,000 Americans expected to die from the virus and 4.8 million hospitalized, according to a presentation hosted by The American Hospital Association (AHA) in February.

This puts the crisis on a level more than 10 times greater than that seen in a severe flu season.

The shock figures fly in the face of claims made by President Trump who has maintained on many occasions that the risk to Americans is ‘low’.

The leaked slides also reveal the significant risks to older people and those with pre-existing health conditions if they catch coronavirus.

People aged 80 and over have a 14.8% chance of dying if they contract the infection, the slides revealed.

The risk declines with youth, though those aged 70-79 and 60-69 are still placed at a significant risk, with 8% and 3.6% mortality rates respectively.

Lawler also estimated that people with heart conditions have a one in 10 chance of dying from the disease, compared to the less than one in a 100 chance among healthy individuals with no pre-existing medical conditions.

‘It’s possible that forecast will change as more information becomes available,’ they said.

The AHA added that the views were the speaker’s and not its own.

However, Lawler isn’t the first to warn that the disease could spread farther than first thought.

Harvard University Professor Marc Lipsitch previously told The Atlantic that up to 70% of the global population will be infected with coronavirus within the next year.

Lawler did not give a particular timeframe for the outbreak but his estimates ramp up fears that the disease could push US hospitals to their limits.

President Trump, who has faced criticism for downplaying the risk of the disease, signed a spending bill to allocate $8.3 billion to tackle the crisis.

The president only asked Congress for just above $2 billion but they rejected that and both houses passed an $8.3 billion spending bill Friday.

While the figure more than triples the amount outlined by the White House last month, Democrat rivals have slammed Trump saying it’s too little, too late.

The new funding measure provides money for public health agencies for tests, vaccines and other treatments.

It will also provide money to state and local governments to respond to the epidemic.

The House passed the legislation Wednesday and the Senate did so on Thursday, as part of a rapid response to increased public fears about the disease, which has disrupted schools, airlines, and spring break plans.

A group of lawmakers from both parties negotiated the increased figure and other provisions in the measure in a rare sign of bipartisanship.

The president also said ‘anyone who wants a test can get a test’, throwing widespread confusion into the air given widespread shortages of tests.

The US death toll from coronavirus rose to 17 Friday, after three new deaths were recorded in Washington state and Florida recorded its first two. 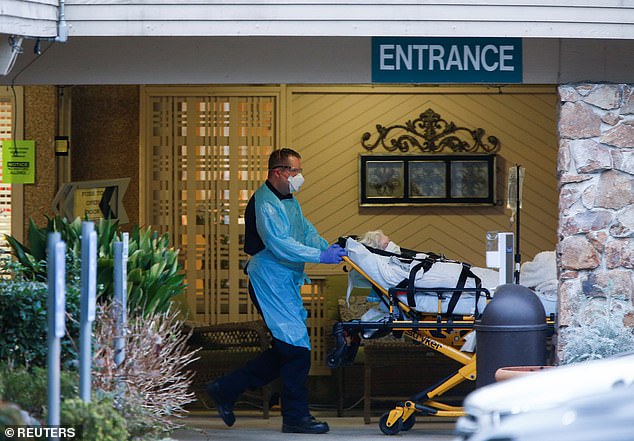 Medics bring out a patient on a gurney at the Life Care Center of Kirkland, a long-term care facility linked to several confirmed coronavirus cases and at least nine deaths