It is a rare glimpse inside the Chinese laboratory at the centre of mounting inter-national suspicion about the Covid-19 pandemic – and will do nothing to dispel fears that it was caused by a catastrophic leak which has been covered up by Beijing.

Pictures from inside Wuhan’s secretive Institute of Virology show a broken seal on the door of one of the refrigerators used to hold 1,500 different strains of virus – including the bat coronavirus which has jumped to humans with such devastating effect.

The pictures, first released by the state-owned China Daily newspaper in 2018, were published on Twitter last month, before being deleted. One comment attached read: ‘I have seen better seals on my refrigerator in my kitchen.’

The Mail on Sunday revealed a fortnight ago that Ministers now fear that the pandemic could have started as the result of a leak.

Pictures from inside Wuhan’s secretive Institute of Virology show a broken seal on the door (centre of shot, by medical worker’s right eye) of one of the refrigerators used to hold 1,500 different strains of virus

The pictures, first released by the state-owned China Daily newspaper in 2018, were published on Twitter last month, before being deleted

Last week, this newspaper also disclosed that the institute had undertaken corona-virus experiments on bats captured more than 1,000 miles away in Yunnan, funded by a $3.7 million grant from the US government.

Sequencing of the Covid-19 genome has traced it to the bats found only in those caves.

Our revelations led to Donald Trump being quizzed at a press conference last week about the leak theory, to which the President replied: ‘We are doing a very thorough examination of this horrible situation.’ 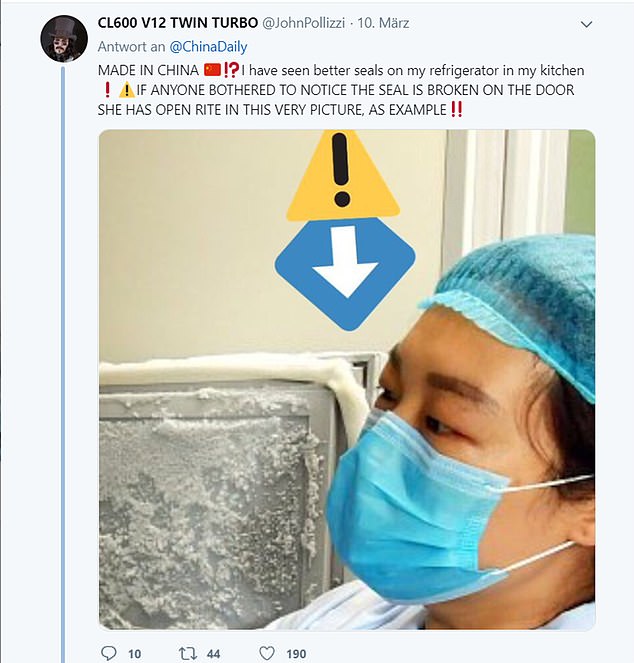 ‘We never tried to cover up’: A letter from the Chinese embassy in London

Last week, The Mail on Sunday carried an article which made groundless accusations, speculations and vicious slanders against China. It even quoted claims from a member of an outlawed cult to discredit

This constitutes a serious breach of the professional ethics of journalism. We strongly deplore it.

Since the outbreak, the government has put in place the strictest, most thorough and most comprehensive containment measures, which have proved to be effective.

As the World Health Organisation says, China has taken the most courageous, most flexible and most active prevention and control measures, which altered the dangerous course of the virus’s quick spread and prevented hundreds of thousands of infections nationwide.

Second, China has been releasing information related to the epidemic in the most open, transparent and responsible manner, publicising relevant data since the early days of the outbreak.

Recently, following standard epidemiological practice, the authorities in Wuhan revisited the cases and made revision to the number of confirmed cases and fatalities on a factual basis.

Data revision in the case of highly infectious diseases is a common international practice.

At the early stage of an epidemic, a small number of medical facilities might be overwhelmed with a flood of new cases and might not be promptly linked up with the disease prevention and control data collection system.

At the same time, preoccupation with saving lives during the most challenging times of the epidemic could result in an inadvertent delay in reporting, under-reporting or misreporting at some facilities. But there has never been any cover-up, nor was a cover-up ever allowed to happen.

The relatively low Covid-19 death toll in China proves that the containment measures are effective. The strict lockdown measures have effectively slowed down the spread of the virus and minimised the cases of infection.

Regarding reports of people in Wuhan queuing to collect urns, this was because funeral

parlours were closed from January 23 to March 23. Urns of those who died of other causes in the past two months are also being delivered now.

The lifting of outbound travel restrictions in Hubei province and Wuhan symbolises an initial victory against the virus and proves that the disease is preventable, controllable and curable.

Certainly, the reopening of Wuhan doesn’t mean that China is lowering its guard. The Chinese government remains vigilant against imported cases and a domestic resurgence of Covid-19 and is taking targeted measures to contain it. At the same time it is getting the economy back on track, reopening factories and ensuring unimpeded travel within the country.

The incident that happened on the border between Hubei and Jiangxi provinces in late March was already resolved. It makes no sense hyping up something that is no longer an issue.

Currently, China is standing together with the UK in the global fight against Covid-19. Our people are joining hands to overcome the current difficulties.

At this critical moment, the media should send out positive signals to promote mutual understanding and co-operation, instead of whipping up anti-China sentiments and poisoning the atmosphere of China-UK co-operation.

Mr Trump also pledged on Friday evening to scrap Us funding for the Wuhan institute.

Meanwhile, Us secretary of state Mike Pompeo has demanded that Beijing ‘come clean’ over whether the virus had leaked from the lab. He said: ‘There is still lots to learn.

The US government is work-ing diligently to figure it out.’

Suspicions of a Chinese cover-up increased further after the Washington Post reported that US diplomats in Beijing had written cables about the Wuhan laboratory in 2018, warning the state Department that ‘the lab’s work on bat coronaviruses and their potential human transmission represented a risk of a new SARs-like pandemic’.

US intelligence sources say that shortly after the coronavirus outbreak began, officials at the lab destroyed samples of the virus, erased early reports and sup-pressed academic papers – and then tried to pin the blame on Wuhan’s wet market, where wild animals are sold for consumption.

The sources believe that ‘Patient Zero’ was an intern at the lab, who spread the virus into the local population after infecting her boyfriend.

One source described it as ‘the costliest government cover-up of all time’.

After initially accepting the wet market theory, intelligence officials in the US, Britain and Canada are increasingly focusing on the Wuhan institute, not least because of the level of coincidence required for the bats in Yunnan to have infected animals in Wuhan, which then passed it on to humans.

Following a video meeting of the G7 nations on Thursday, French President Emmanuel Macron said: ‘There are clearly things that have happened that we don’t know about.’

The World Health Organisation, which faces allegations of complicity with Beijing over the pandemic, quickly accepted and propagated the wildlife market theory.

Although British Government sources say that the evidence suggests that the virus was ‘zoonotic’ – originating from an animal – that is still compatible with the theory that it first passed to humans as a result of an accident by scientists studying it in a laboratory.

However, one political source said that there was ‘growing scientific curiosity’ over the symptoms of a marked loss of taste and smell in many victims of Covid-19.

Beijing insists that the fact that the country’s primary virology institute is based in the city at the centre of the outbreak is just a coincidence, dismissing links to the laboratory as ‘baseless conspiracy theories’.

In a letter to The Mail on Sunday, a Chinese Embassy spokeswoman says: ‘There has never been any cover-up, nor was a cover-up ever allowed to happen.

The relatively low Covid-19 death toll in China proves that the containment measures are effective. strict lockdown measures have effectively slowed down the spread of the virus and minimised the cases of infection.